Put it somewhere in your load-path. For example to ~/.emacs.d/.:

Don't forget to add ~/.emacs.d to your load-path. Afterwards you can load the mode with M-x load-library RET undertaker RET: 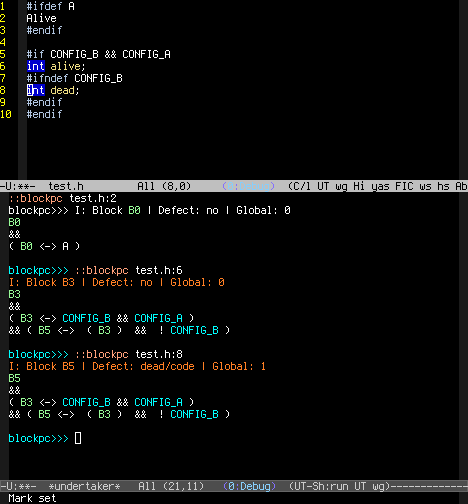 Visit the you whish to examine and enable the undertaker minor mode with M-x undertaker-mode. If we have for example the following piece of C Code and no feature model for this, but want to get the preconditions for various blocks.

If you put your point to line 2 and press C-c u b the current position in file will be sent to the undertaker process and you will get the block precondition for the first block:

Here you can see, that you examined Block 0 (B), that it isn't dead and that B0 is enabled iff A is enabled. If we ask for the precondition at line 8 we will get a slightly other result, as the code block is dead.

Here you can see that we have examined B5, which depends upon B3 and !CONFIG_B, but B3 relies also on CONFIG_B. So it can never be fullfilled and the block is code dead. For more information about the interactive undertaker shell see the general UndertakerDocumentation.

Note: See TracWiki for help on using the wiki.